Inspiration Behind The Sojourn 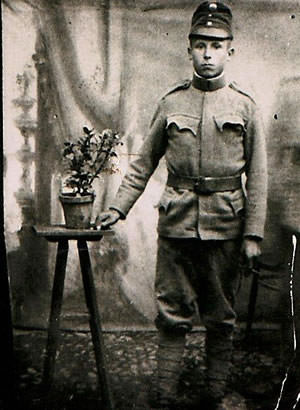 On my desk I kept a photograph I have of my grandfather, a boyish-looking seventeen, posing with three other “gunners” of the Austro-Hungarian army with what I would discover later was a makeshift anti-aircraft gun, which the Austrians used unsuccessfully against the British Sopwith Camels that wreaked havoc among the Central Powers troops on the Italian front.

The picture is dated spring 1918, just before the battle of the Piave River. In a matter of months, the other three men would be dead and my grandfather would be on a forced march across Italy to his internment on the Island of Sardinia. I knew the villages in which these men had grown up. I traveled to the battlefields where they died. The Isonzo, the Piave, the Carinthian Alps, the Bainsizza Plateau. Like Jozef (the protagonist of The Sojourn) my grandfather also grew up with a stepmother, who said to him when he walked through the door, “Why aren’t you dead like all the rest of them?”

That question has haunted me ever since I heard it told around the stove in my grandmother’s kitchen so many years ago. My grandfather’s survival, his coming-of-age story in another place, another country, is the reason why I can think of what it means to come of age, to have a history, to reflect on a past in another place, and to write about it. In my novel, I wanted to take the survival spirit of my grandparents and great aunts and uncles—that spirit which is identifiably American—and place it back in the old country, in the mind, heart, and body of one man, and see how it was that that spirit survived in the sojourn of its youth.